In the period between 2016 and 2020, 402 million dinars was spent on compensation for MPs’ getting to the National Assembly in their own car, on renting apartments in Belgrade, accommodation and travel abroad and in the country. CINS has learned that there is no control over how MPs use the money meant for fuel and accommodation expenses, which creates room for malfeasance. Former MPs and experts believe that forming a separate body tasked with overseeing MPs would be the solution.

In addition to their salary and supplement, MPs have always been entitled to certain benefits. Fourteen years ago, the National Assembly passed a new set of rules in a bid to save the money taxpayers set aside for these perks, but also to reduce manipulation and abuse.

However, an analysis conducted by the Center for Investigative Journalism of Serbia (CINS) shows that no one checks whether the MPs actually live in the apartments for the rental of which they received money, whether they have spent the money given for fuel to come to parliamentary sessions in their own car, which paves the way for abuse.

The parliamentary Committee on Administrative, Budgetary, Mandate and Immunity Issues defines the procedure whereby MPs gain these benefits and the amount of compensation. Thus MPs from other parts of the country sign a document at the beginning of their term of office, after which they automatically receive compensation for fuel for coming to sessions in their own car. If instead of traveling they decide to stay in Belgrade, they can get money for accommodation, and submit a contract with a landlord or a hotel receipt as proof. Those who rent an apartment are also given money for living away from their family (40% of the average monthly salary). 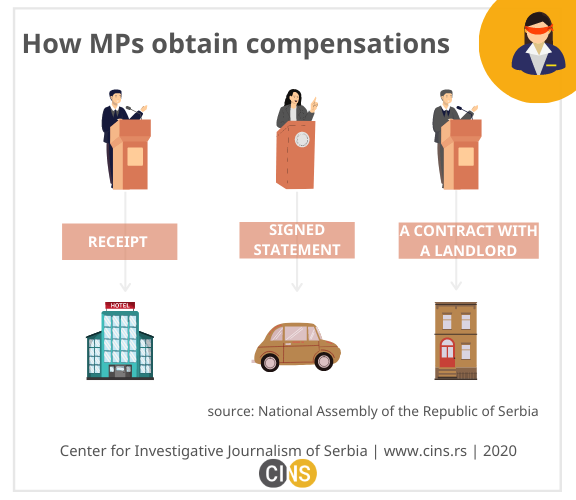 The CINS database of expenses reveals that from the start of 2016 to the start of this year 283 MPs used these benefits, and 299 million dinars was taken from the budget for that purpose.

During that period 289.6 million dinars was paid to MPs for fuel alone. According to current procedures, the MPs in no way proved that they had actually bought fuel with that money. In the words of former MP and deputy chairman of the Committee on Finance, State Budget and Control of Public Spending, Milan Lapčević, the procedure itself is the problem. As he puts it, the competent Committee should intensify oversight:

“If you come to work in your own car, it’s no problem, but you should document it with a road toll receipt, document it with fuel receipts, with your presence etc. This loose way of looking at it, in the sense of only whether you showed up without documenting the fact that you had come by car is, of course, subject to manipulation,” Lapčević explains.

CINS’ research has also shown that even the MPs who have apartments in Belgrade used these benefits.

During a parliament session, an MP also has the right to stay at a four-star hotel or rent an apartment in the capital. For that they need to deliver to the parliamentary finance department a receipt from the hotel they stayed at, i.e. a contract with a landlord. From 2016 to the end of 2019, six MPs used these benefits, which cost the budget 6.3 million dinars.

Lapčević explains that the finance department only checks whether the receipt is valid and pays out the money based on that. In other words, whether an MP actually did use the service is not checked. Alongside the cost of apartment rental (up to 35,000 dinars per month), the Assembly also paid five MPs compensation for living away from their families, totaling close to three million dinars.

An Independent Monitoring Body Is the Solution

One of those who chose to rent an apartment is Boško Obradović, the Dveri whip at the time. Obradović thinks the lack of control should be dealt with by forming a separate body that would monitor the MPs:

“I think that, besides the Administrative Committee, the National Assembly should form another working body which would only deal with overseeing the spending of funds from the parliamentary budget, like some sort of supervisory board, which would have full authority to that end.”

Faculty of Political Sciences professor Dušan Spasojević believes that keeping track of MPs’ benefits is very difficult. However, greater transparency and publicizing which MPs have used their benefits would reduce the possibility of MPs abusing said benefits.

He also says that separate supra-party bodies which monitor how the MPs are using their benefits have become global practice. A good example for that, according to Spasojević, is Great Britain.

The Daily Telegraph in 2009 published a number of instances of embezzlement by British MPs. The journalists discovered that certain MPs had used the money from the benefits to renovate their apartments or purchase luxury furniture.

“I know that two or three MPs ended up in jail,” Spasojević explains. “Then they formed this body in the Parliament which actually monitors [them] and which publishes the data.”

Furthermore, their MPs have detailed instructions on how they can spend that money.

Bratimir Vasiljević, an MP of the ruling Serbian Progressive Party (SNS), does not like the idea of stricter oversight. He thinks that the MPs have low salaries and might abandon their office because of intensified monitoring.

Old problems in a new packaging

In late 2005, at the last parliamentary session before a decision of the Administrative Committee (now the Committee on Administrative, Budgetary, Mandate and Immunity Issues) to apply stricter oversight of the way in which MPs receive money for compensation, a debate started among the MPs on the subject of transportation abuse.

MP Meho Omerović launched the topic of how the MPs used money for travel expenses. The MPs’ of the “warring sides” passed the proverbial ball into each other’s courts, while some defended themselves by claiming they were not collecting any money.

Aleksandar Vučić, an MP of the Serbian Radical Party at the time, said at one such session that everyone was familiar with certain methods of malfeasance.

“They’re just looking to crank up their expenses, where they travel from, so five of them are crammed into one car and then all five charge those expenses. We all know that happens, but not everyone is like that and not everything is the same,” said Vučić.

In those months, the media also reported on potential abuse by Serbian Radical Party MPs.

In early 2006, the Committee, headed by then opposition MP and Serbian Radical Party member Tomislav Nikolić, changed the rules of payment of the benefits.

“I don’t know how fruitful it would be for you to delve into the private life of every individual, every MP. You’re going to check whether they’re at home or not, whether they’re at their place of residence or not, each of us has some private obligations and a private life. (…) I think that would be too much and that many would wonder whether they could economically justify the fact that someone accepted that obligation. Those are big obligations and a big responsibility,” Vasiljević told CINS.

“If every MP in Serbia had a salary of at least 2,000 euros, then every move could be monitored,” the MP explains.

Jurist and former state secretary at the Ministry of Justice Danilo Nikolić thinks the problem is not being solved because that suits political parties. He believes that the MPs from the “warring” parties protect each other and use the money they take to finance their respective parties, especially the smaller ones.

“They take that for the party and it seems that they are all doing it and it is one of the ways to finance a party. Otherwise the others would ask that it be investigated, that a parliamentary committee be formed,” Nikolić points out.

Made possible by support from the Dutch Ministry of Foreign Affairs

MPs Get Millions for Fuel Solely Based on Their Own Statements

RSD1.4 Billion for MPs, Money Goes Even to Inactive Ones