After the protests in Belgrade and Novi Sad in early July, misdemeanor courts handed down a total of 43 convictions in expedited proceedings. Almost half of these verdicts were reached based on statements by police officers, whereas the judges did not consider statements by citizens to be true. According to a CINS analysis, for similar cases of insulting a police officer or carrying a flare some received a minimum fine, while others were sentenced to prison. Two judges of the Misdemeanor Court in Belgrade particularly stood out in terms of sentencing, as out of the total 12 verdicts we had access to they handed down prison sentences in as many as nine.

Igor Šljapić, a student of the School of Electrical Engineering, at the recent protests in Belgrade carried a banner reading “What are you going to do when you’ve used up all the tear gas.” In that way, Igor wanted to express his dissatisfaction with the large amount of tear gas police had used in clashes with demonstrators.

While he was standing with some friends near the National Assembly, several people who were not wearing any uniforms approached them and asked for their ID, and then arrested Šljapić and took him to the Assembly, his attorney Jasmina Belić told the Center for Investigative Journalism of Serbia (CINS).

His parents did not know where he was until he called them on the phone from prison.

Šljapić was very quickly taken to the Misdemeanor Court in Belgrade which sentenced him to 30 days in prison for cursing at an officer of the Criminal Police Directorate.

This is just one of the 82 misdemeanor proceedings that were carried out between July 8 and 15 in Belgrade and Novi Sad for insulting and attacking police officers, destruction of property and possession of flares at the protests in these cities. Most of the arrested were handed down a verdict on the same or the following day.

According to the data CINS received from the misdemeanor courts, 43 convictions and nine acquittals were handed down by July 15. Thirty proceedings are currently under way. 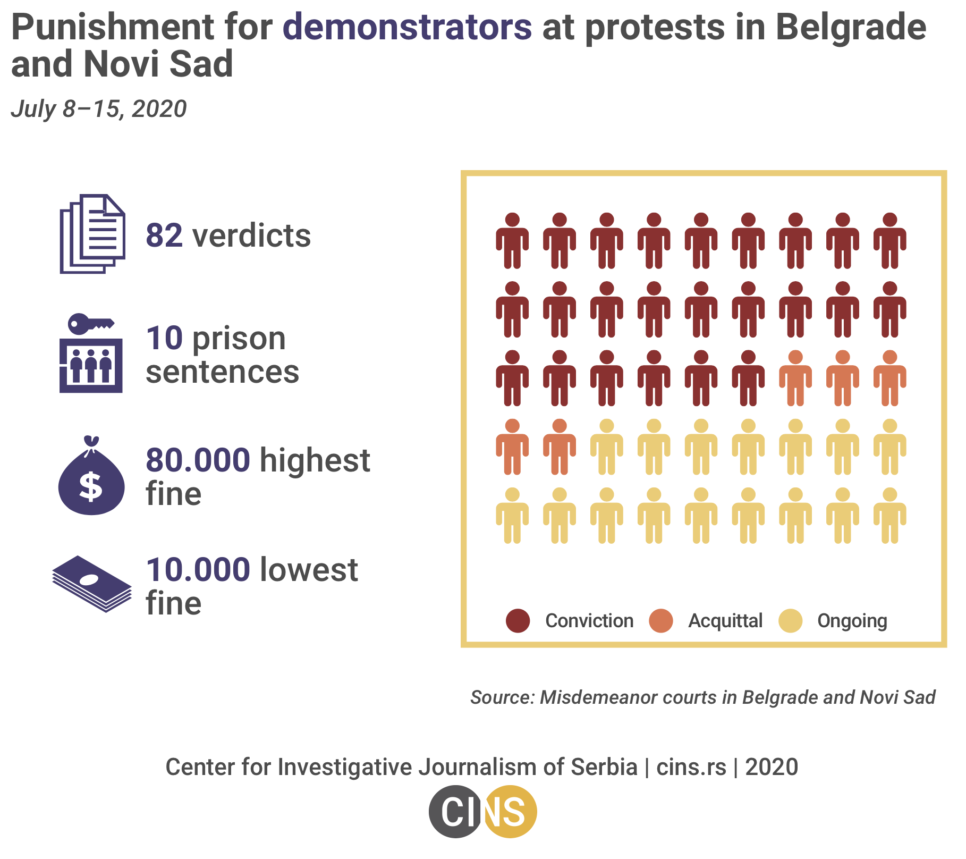 The data the Misdemeanor Appellate Court delivered to CINS show that 13 appeals have been filed to the decisions of the courts of first instance in Belgrade and Novi Sad so far.

More than half – seven, to be specific – were resolved by annulment of the verdict, two appeals are still in progress, while convictions were confirmed in two cases. Both the demonstrators and the police may appeal the verdicts. CINS analyzed 41 convictions, while the Misdemeanor Court in Belgrade did not give us two more that were reviewed by the Misdemeanor Appellate Court.

Just under half of the convictions were handed down based on a statement made by a police officer because judges chose to believe them rather than the defendants, who denied having insulted the police or having taken part in the riots.

The court found some of the defenses of the accused to be unsubstantiated and designed in advance to avoid punishment, whereas the police officers’ statements were “credible, logical and impartial.”

In one such verdict, which sentenced a person for throwing rocks and other objects at Novi Sad City Hall, a policeman said he was not sure what the defendant had thrown, whether it had been a rock or a bottle, but that he had been in a group of people who had thrown those things. Sometime later, during confrontation with the defendant, the policeman even said:

“…I don’t know whether you threw that small bottle of water toward City Hall or into a trash can, I saw you swing your arm and in that situation, after I had remembered you, I followed you until you moved away from that crowd.”

However, the judge said the policeman had been “clear and convincing, sure of what he had seen, and did not change his statement.”

Student Igor Šljapić, according to the verdict, also denied all allegations of insulting the police, while the court used a police officer’s statement as evidence.

Vladica Ilić of the Belgrade Center for Human Rights believes that the fact someone holds a particular office should not mean that they are automatically believed more than citizens. He says that the starting point should be that officers speak the truth, but that the presumption of innocence should not be passed over so lightly.

“The burden of proving the facts on which the existence of a misdemeanor depends lies with the police, while in the absence of sufficiently clear evidence that would meet the proven standard of beyond a reasonable doubt, the presumption of innocence must apply,” Ilić explained to CINS.

“It is difficult to understand why the Misdemeanor Court in Belgrade in its justification of certain verdicts based everything on the notion that the defense of the accused citizens was untrue and created in advance for the purpose of avoiding responsibility, without offering any evidence or circumstance that would support that conclusion. Such an assessment in principle of a defendant’s defense is completely legally unfounded.”

Jail for Some, Fines for Others

The protesters who were prosecuted before the misdemeanor courts in Belgrade and Novi Sad were mostly held accountable for violations of the Law on Public Order and Peace. For example, insulting an officer under this law carries a fine of between 50,000 and 150,000 dinars, or a prison sentence of up to 60 days.

Only the court in the capital handed down prison sentences, and so out of nine such penalties, which CINS had access to, seven were handed down by Judge Goran Milutinović and two by Judge Đuro Pavlica. They judged a total of 12 cases, out of which they resolved two by handing down fines and one by acquitting the defendant. Others were sentenced to prison for 30 to 60 days.

However, the verdicts CINS analyzed show that the accused received drastically different penalties for the same things.

For example, Judge Milutinović sentenced a defendant to 30 days in prison for shouting “cop c**ts” at police officers. For this profanity the Misdemeanor Court in Belgrade could have issued a fine, but, according to the verdict reached on July 12, Judge Milutinović believed that more severe consequences had been caused, which was why he opted for a prison sentence. The verdict did not say what exactly more severe consequences of insulting the police were.

However, just a day earlier, a demonstrator who had hurled similar expletives at the police (“Arrest me if you dare, you c**ts, who’s protecting you”) was handed a fine of 50,000 dinars, while the verdict was again signed by Judge Milutinović.

Pavlica’s and Milutinović’s colleagues from Belgrade punished the demonstrators convicted of insulting police officers only with fines, often within or even below the legal minimum.

Vladica Ilić believes that insulting a police officer falls into the category of inappropriate punishable behavior, but that in these cases fines are enough and that prison sentences are difficult to justify.

“I think that 30 or even 60 days in prison for an insult is too harsh a punishment, especially in cases of defendants who had not been convicted before, i.e. who found themselves before a court for the first time,who had spoken a sentence or two in a situation of protest in which the police, through an unselective and brutal use of force against citizens, had provoked the anger of many of them.”

Ilić adds that in these cases the courts applied an exception prescribed by the Misdemeanor Law, according to which the serving of a sentence for a severe offense may begin even before a conviction has become final, if there is a danger of re-offense or avoidance of serving a sentence. The verdicts, however, did not state the circumstance from which such a conclusion could be drawn, rather they only copied the legal provisions based on which the urgent execution of prison sentences was ordered, which is an impermissible omission by the courts.

What is also interesting is that in a number of cases fines below the legal minimum were paid – the fact that the accused had no prior convictions was taken into account, but it was not applied everywhere.

For example, Judge Đuro Pavlica sentenced a defendant to 30 days in prison because the police had found in his possession a flare and material for a Molotov cocktail. On the other hand, his colleague from the Misdemeanor Court in Belgrade Ljiljana Bondžić handed another defendant, having taken into account his lack of previous convictions, a fine of just 20,000 dinars for possession of three flares.

The protests in Belgrade at the beginning of July were also marked by scenes of violence, large quantities of tear gas and numerous arrests, and as CINS reported, the police beat some of the participants even though they had not been involved in the riots.

In their defense, the accused also talked about police brutality during arrests, but that was not taken into account nor did the police officers make any statements on the subject.

In one verdict the defendant claims he did not even take part in the demonstrations, that he had been returning from work and did not insult any police officers, but that they hit him in the head and abdomen, threw him to the ground and took him to the Assembly before arresting him.

Igor Šljapić is now at large, but may soon have to go back to prison. After the Misdemeanor Appellate Court annulled the first verdict and sent the case for retrial, Judge Goran Milutinović of the Misdemeanor Court again decided to sentence him to prison.

“I think that this is a very unpleasant experience for him, that it will leave a mark. Whether he will now, after this, decide to leave this country, I’m exaggerating, or if he will continue to believe in the law and justice, that is the question, but was he comfortable – no he was not,” Šljapić’s attorney Jasmina Belić told CINS.

NewsSerbia
Man from Niš Claims He Was Questioned in Security Information Agency Premises After Protests
NewsSerbia
Testimonies of Police Brutality: After One Hits, Another One Comes to Do the Same
Investigative storiesMediaMedia regulators
Pink TV Drones Weren’t Allowed to Fly Over One of the Five Million Rally
wpDiscuz
Send this to a friend