Cargo being unloaded in Myanmar
Serbia exported millions of euros worth of rockets to Myanmar in 2021 days after a military coup that has since triggered a civil war. And four more export licences followed.

The Ilyushin-62M, operated by the Belorussian private air carrier Rada Airlines, took off from Belgrade’s international airport a few minutes after midnight on February 9, 2021, loaded with hundreds of Serbian-made 80mm rockets.

After a stop in Egypt, the plane touched down 8,000 kilometres east in Yangon, capital of Myanmar and at the time the scene of a bloody military coup that began on February 1 and would tip the country into civil war.

The plane, however, should never have left the runway.

Ignoring widespread reports of violence, killings, and human rights abuses, Serbia allowed the arms shipment to go ahead, despite a requirement that the government revoke any arms export permit should conditions in the destination country change and there be a risk that the arms might be used to violate human rights.

In March 2021, the United Nations Human Rights Council adopted a resolution expressing deep concern at the threat to human rights in Myanmar from unregulated or illicit arms transfers.The following June, with the military in Myanmar seeking to crush mass protests, the United Nations General Assembly called on all member states “to prevent the flow of arms into Myanmar.”

Serbia was among 119 of 193 member states to vote in favour of the non-binding resolution, though it had already issued at least four more arms export licences for Myanmar, two in March, one in April and one in June. It is unclear whether the shipments went ahead.

Belgrade to Yangon, via Cairo

According to documents of the Serbian trade ministry, a total of 2,524 80 mm unguided rockets were exported from Serbia to Myanmar in two shipments, in January 2021 and then in February.

The entire order was worth 4.75 million euros and was exported by Belgrade-based Jugoimport SDPR, a state-owned intermediary in the import and export of defence-related equipment.

The first shipment of 880 rockets was executed on January 23, a week before the Myanmar military seized control following a general election won in a landslide by the NLD party of Aung San Suu Kyi. For the second shipment, of 1,644 rockets, Serbia gave green light  on February 8, with Myanmar in the grips of a coup and fast descending into violence.

Based on open source evidence, BIRN, Myanmar Witness and CINS pieced together the path both shipments took, from Belgrade to Yangon. 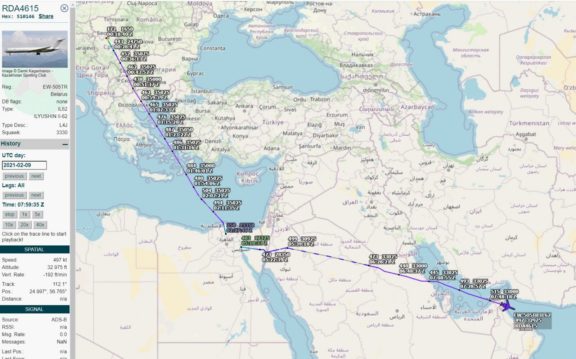 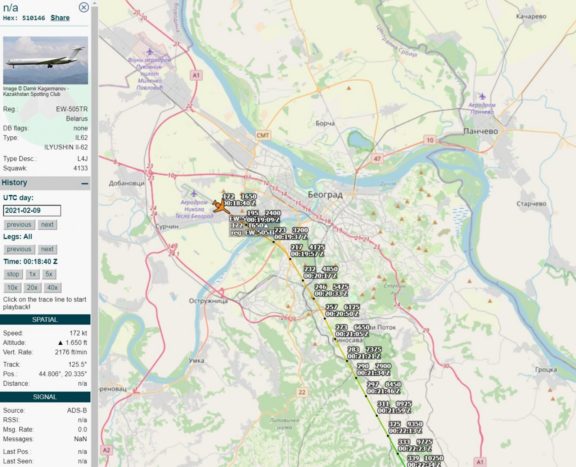 According to data from FlightRadar24 and ADS-B Exchange, having departed Belgrade airport on February 9, the Ilyushin-62M aircraft, registration number EW-505TR, stopped in Cairo, capital of Egypt, for a few hours, before continuing to Yangon, where it landed at just after 6 p.m. local time.

Images from the ground also confirm the plane’s arrival in Yangon, with a picture uploaded the same day showing crates being unloaded. 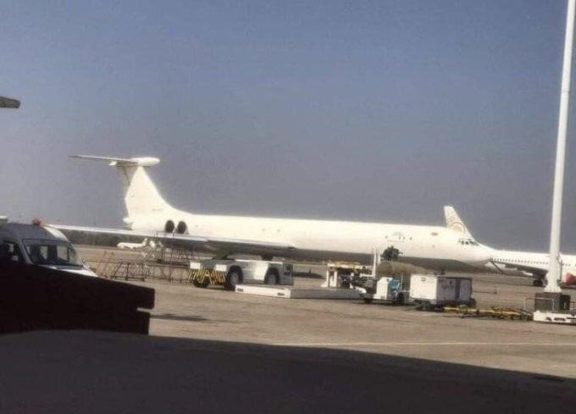 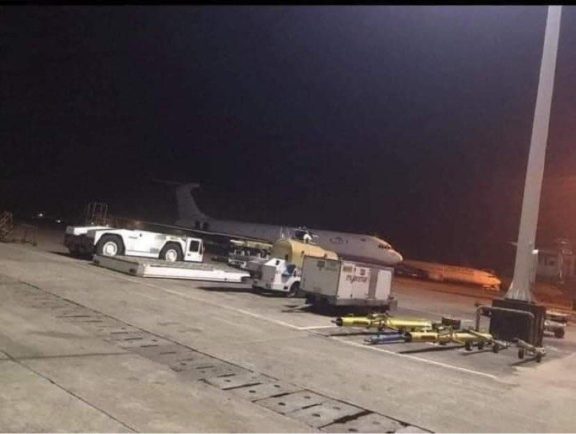 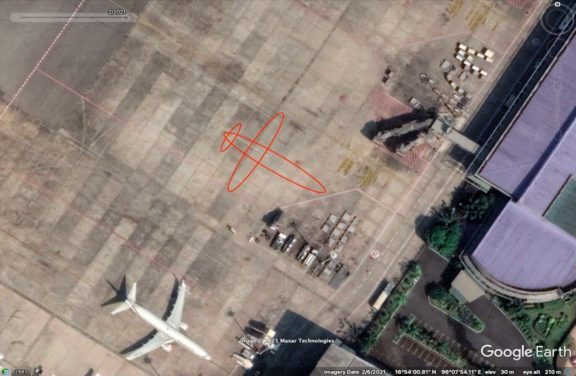 Images posted on social media show that the same plane had also been refurbished with a new wooden floor for cargo trips. From the flooring, the side panelling, and the numbering along the inside of the plane (indicated in the white boxes), it can be seen that the cargo pictured being unloaded is from the same aircraft, EW-505TR. This is supported by additional images showing the plane’s interior, including matching light fittings in the ceiling and the number ‘65’ on the walls. The wording on the green crates also match wording that can be found on Serbian-produced crates of weapons.

The shipments tracked in this story represent just a fraction of the arms trade between Serbia and Myanmar.

Ties between the two countries go back to the 1950s when Myanmar, then known as Burma, and Yugoslavia, of which Serbia was part, were founders of the Non-Aligned Movement.

In 2015, the defence ministries of both countries signed a number of special collaboration agreements and, according to the UN Comtrade database, Serbia exported weapons worth an estimated $23.5 million to Myanmar between 2018 and 2021.

Trade ministry documents indicate that Myanmar has mainly bought bombs, torpedoes, rockets, projectiles, various types of ammunition and aircraft. Among the ‘end users’ are the Myanmar defence ministry, the air force and offices of the army and air force generals.

BIRN, Myanmar Witness, CINS and Lighthouse were unable to verify whether Serbian arms had been used in the fighting unleashed by the military coup.

However, unguided rockets of the same type were used in air strikes on civilian areas of the town of Loikaw, capital of eastern Kayah state, in January this year.

In the video posted on Facebook on January 11, a fighter jet is seen firing at least three salvos of unguided rockets, which leave a trail of fire and smoke consistent with the electric ignition from two under-wing pods and proceed straight towards the ground.

A second video posted on Facebook the same day also shows an aerial assault on what can be seen at the end of the video is Loikaw, with five more salvos of rockets fired, approximately at this location. The UN estimates that half the population of Loikaw has been forced to leave their homes and that almost 90,000 people from Kayah state are displaced.

More than 650 houses and other civilian buildings, including churches, monasteries and schools, have been burned down or destroyed in Kayah state since May 2021, according to reports cited by the UN.

The Serbian government says it has not issued any new licences for arms exports to Myanmar since the crisis erupted and has dismissed media reports in Myanmar that a Serbian delegation visited in January this year to discuss military cooperation and weapons sales.

“A delegation of the Ministry of Defence and the Serbian Army was not in Myanmar and representatives of the Ministry and the Army did not negotiate the sale of weapons to that country,” the defence ministry told Serbian daily Danas on January 27. “We note that permits for the export of weapons to Myanmar have not been issued since the outbreak of the latest crisis in that country.”

Yet the findings of this story show that exports based on previous permits were executed after the coup, in apparent violation of Serbian legislation requiring permits to be revoked if security conditions change and there is a risk of the arms being used to violate human rights.

The rules in Serbia on arms export licences are harmonised with common rules adopted by the EU in 2008 and the Arms Trade Treaty, which regulates the international trade in conventional weapons. These stress that a country must deny an export licence if there is a clear risk that the military technology or equipment to be exported might be used for internal repression.

At least four more permits were also issued after the military takeover, though it is unclear whether the exports went ahead.

The first was issued on March 8, 2021, more than a month after the coup, to the Belgrade company JNJ Export Import Ltd for the export of ammunition worth 2.65 million euros. Two days later, on March 10, state arms manufacturer Sloboda Cacak also received a permit to export four 122 mm high explosive rounds.

Then, despite the deteriorating security situation in Myanmar and reports of violence against civilians, Serbia issued another licence on April 7 to the private company Zenitprom, including for the export of ammunition made by Sloboda Cacak.

A fourth post-coup export permit was issued on June 8, again to Sloboda Cacak, for the export of ammunition. The three permits issued to state-owned Sloboda Cacak, two of which came after the coup, were worth an estimated 2 million euros.

Weapons made in Serbia have been spotted in several conflict zones in recent years. The Serbian government denies that the arms have been used in human rights violations and claims that some EU countries also export weapons to conflict zones.

Most recently, in August last year, Amnesty International criticised Serbia for exporting arms to Burkina Faso, where Serbian-produced guns were used by an Islamic State affiliate responsible for killing hundreds of civilians.

In June 2020, when Libyan government forces pushed back rebel forces from the south of Tripoli, a Serbian-manufactured shell was found strapped to a teddy bear as a booby trap laid presumably by retreating forces.

Authorities in Iraq also used Serbian-made gas grenades in October 2019 to disperse anti-government protesters in Baghdad, to deadly effect. Serbian-made arms were also spotted in Syria in 2016 during the conflict there.

Dina Đorđević
Dina joined the CINS investigative team in mid-2017, having finished the CINS Investigative Journalism School in 2015 as the most successful participant. From 2015 until joining CINS, she worked as a journalist on the aviation website Tango Six. She started her career as a TV journalist at TV Production Group Mreža in 2014. Nowadays she predominantly covers environmental and aviation topics, as well as energy. She has experience working on cross-border stories – in 2020 she wrote about problems concerning renewable energy sources in the Balkans for the Balkan Fellowship for Journalistic Excellence awarded by BIRN. She contributes to the CINS multimedia production by making short videos and infographics. In 2019 Dina won several national and international awards for investigative stories related to small hydropower plants in Serbia, which she had worked on together with a coworker – the Award for Outstanding Merits in Investigative Journalism handed by the South East Europe Media Organization (SEEMO) and the Central European Initiative (CEI); the EU Investigative Journalism Award; a special merit award within the National Awards for Excellence in Investigative Journalism handed by the Independent Journalists’ Association and the U.S. Embassy, while in 2018 she was a finalist in this category. She also won the 2018 Marina Kovačev award for best younger journalist under 30 in Serbia, handed by the Novi Sad School of Journalism. Dina was a member of the CINS team that won the 2017 Dušan Bogavac award for ethics and courage. She is experienced in holding trainings for journalists.
Send idea
Read all
Marija Ristić
Marija Ristic is the executive director of Balkan Investigative Reporting Network, a network of seven non-governmental organisations promoting freedom of speech, human rights and democratic values in Southeast and Central Europe. Ristic oversees the activities and communications within the Network and represents it publicly.
Send idea
Read all
Jovana Tomić
Jovana Tomić has been covering current events for CINS since the beginning of 2020. Before coming to CINS, she spent two years gaining experience at the Internet section of daily Danas. She attended the CINS Investigative Journalism School in 2018, after which she took part in the creation of a database on close to 2,800 proceeding the Anti-Corruption Agency conducted against public officials in Serbia. The database was shortlisted for the GEN Data Journalism award in 2018, in the open data category. Jovana is the winner of the 2020 Marina Kovačev award for best young journalist.
Send idea
Read all
Saša Dragojlo
Journalist at BIRN at Balkan Investigative Reporting Network
Send idea
Read all