Residential building destroyed by a fire in October 2020; photo: CINS
After the fire that broke out in the residential building in Bač in October 2020, tenants were promised new public housing, but this has not happened to date. In a controversial and urgent procedure, the Municipality chose a company for the construction of apartments, and then kept pushing the deadlines for completion of works, CINS can reveal.

Anica Šipek will never be able to forget the heat and panic.

It was around 3 a.m., towards the end of October 2020, when the building located not far away from the center of Bač, where she was living with her family, caught fire. The building, a former workers’ settlement, was so old and in such poor condition that those who had been living there for some time were not obliged to pay rent to the Municipality.

All the tenants, more than 30 of them, managed to escape with their lives intact, but the building was “swallowed” by flame, leaving behind only ruins.

“We did not fear for our lives once we were out, but started thinking about where we would go, what we would do, and where to start from. Thank God that no lives were lost, and as for what comes next – will anyone help us?”

The Municipality provided temporary accommodation to Anica Šipek and her neighbors and promised to provide a permanent solution – the construction of 16 new apartments for public housing that they will be able to use.

However, 15 months have passed since the fire, but new apartments have not been built yet.

Documents collected by the Center for Investigative Journalism of Serbia (CINS) and interviews with tenants reveal both that the Municipality of Bač chose a company to build apartments through a problematic public procurement procedure and the consequences suffered by these citizens due to postponed deadlines.

Anica’s brother Andrija Surop is the coordinator in charge of communicating on behalf of the tenants with the Municipality regarding construction. He says that although he initially believed the promises would be fulfilled, he is now disappointed. When asked how he feels, he replies:

“Like crap, what can I tell you. (…) I’m talking to you here now because I have no will power left.”

Five months after the fire, at the end of March last year, the Municipality announced a public procurement procedure in order to find a company that would complete the first phase of works.

“As the construction of this type of facility takes several months, and in order not to waste precious time, it is necessary to start the first phase of the works as soon as possible,” the explanation of the emergency procedure reads.

The estimated value of the procurement was 24.4 million RSD (excluding VAT), and due to “extreme urgency”, the so-called negotiation procedure was announced without a public invitation. In other words, only companies invited by the Municipality could participate.

Conducting a public procurement under urgent procedure was under the scrutiny of the Public Procurement Office.

After the Municipality addressed it requesting an opinion, the Office asked for a supplement, i.e. additional explanation as to whether they considered that the procurement be carried out through an open procedure with a shorter deadline. As they did not receive an answer, they filed a misdemeanor charge against Bač Municipality Administration Head Špiro Šorgić.

In a statement for CINS, Šorgic says that they did not send a supplement because they are not obliged to do so by the Law on Public Procurement.

However, Rade Đurić believes that the urgent procedure is problematic.

“It makes no sense. Logically speaking, what is urgent here is to provide living conditions. That means finding temporary accommodation for the tenants, which has been done.”

In support of this is the fact that concrete, reinforcement, roof construction, and other construction materials were procured for construction through public procurement procedures, but this was not done by urgent but by regular – open procedures. Đurić believes that this slows down the process that was allegedly carried out by urgent procedure, making it superfluous as well.

According to Rade Đurić, a lawyer who has been analyzing public procurement procedures for years, Dynamic Invest Group had to be disqualified due to a bid that exceeded the estimated value of the procurement and should not have been negotiated with.

“The Municipality accepted the offer even though it was unacceptable, and they negotiated with the company even though they had to reject it.”

However, that did not happen and this company got the job after two rounds of negotiations by lowering its price by around 27 million RSD and becoming the highest bidder.

Bač Municipality Administration Head Špiro Šorgić explains that they did not reject Dynamic Invest Group at the beginning of the procedure because an error was made:

“The one who lowered the price made a mathematical error. Here in the Municipality, there was a discussion about what was going on, and both sides agreed that it was a computer error.”

Đurić points out that in that case, the decision on awarding the contract should point to the existence of an error, but also the request for correction within the expert assessment:

“It seems that this was done quite consciously and with the intention of either concealing the real price, or in case of one offer, having that company be the only one with which negotiations must take place, even though its offer is far above the estimated value.”

Due to unforeseen works, Dynamic Invest Group signed an annex to the contract with the Municipality on 21 December last year, which entitled them to an additional 3.2 million RSD (excluding VAT). 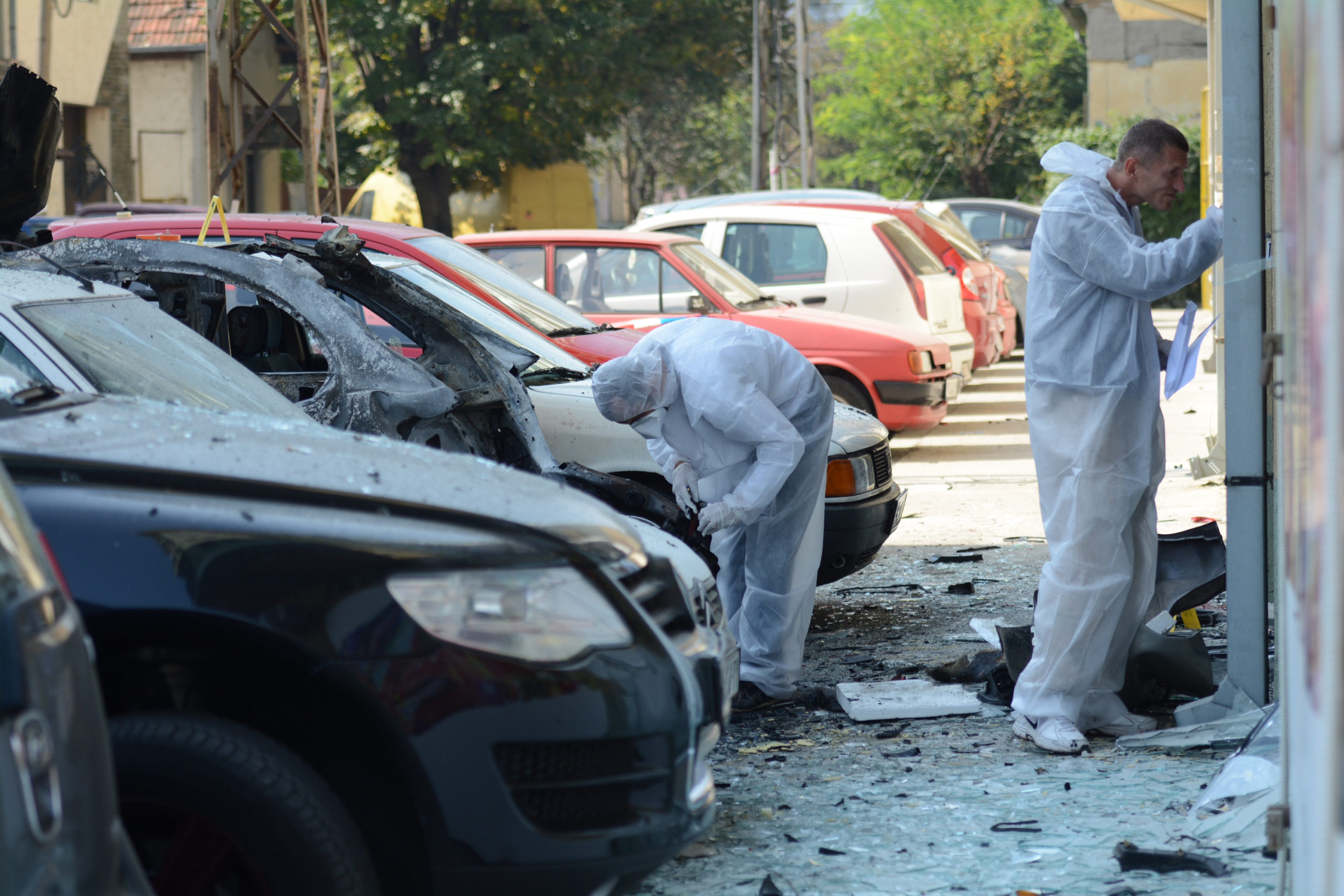 POLICE AT THE SITE OF THE EXPLOSION IN WHICH RADOVAN RADIĆ WAS INJURED; PHOTO: BETA / DRAGAN GOJIĆ

Although we asked to speak with the owner of this company, no one contacted us by the time this text was published, despite promises made.

The owner of Dynamic Invest Group is Radovan Radić, whom Blic wrote about in 2014 – he was seriously injured when a car, under which a plastic explosive had been attached, exploded on Europe Boulevard in Novi Sad.

Waiting for a home

Municipality Administration Head Šorgić claims that everything foreseen by the contract was completed at the end of December 2021. The reality, however, is quite different.

In February of this year, CINS journalists came across a roofless building on the construction site, even though the planned items in the contract with the contractor included roofing works.

At that time, we did not find any workers on the construction site, despite the fact that it was a working day.

Šorgić points out that work is being done on the building – plastering and installing windows. According to him, the money for that was provided partly from donations, while the remainder will have to be collected by the Municipality:

“Do you understand that there is no money?”

The entire building was initially supposed to be completely finished by November, then by December 2021, but both deadlines were postponed. President of the Government of Vojvodina Igor Mirović visited the construction site in October last year and stated that the Province would allocate additional money so that the families could move into the new building by June 2022.

In the meantime, for the temporary accommodation of tenants, according to Šorgic, the Municipality allocates between 50 and 100 EUR per month for each of the families, depending on the number of members and the size of the apartment where they are accommodated.

Anica Šipek says that she and the other tenants are not satisfied with the situation in which they now find themselves in. One problem is a lack of heating because, as she says, they did not get it since they had been told they would be spending the winter in new apartments.

The accommodation, which was supposed to be temporary, has been their place of residence for more than a year, and some of the owners want to sell the rented space.

“They feel uncomfortable, those landlords are no longer what they were at the beginning and there is a feeling of being fed up on both sides,” Šipek says.

And while they are all waiting for new homes, some will not live to move into them. Anica’s and Andrija’s older brother passed away in temporary accommodation last year.

Both Andrija Surop and his sister Anica Šipek, who say they are members of the Serbian Progressive Party (SNS), told CINS that municipal officials often “hid” behind President Aleksandar Vučić and his brother Andrej while communicating with them. 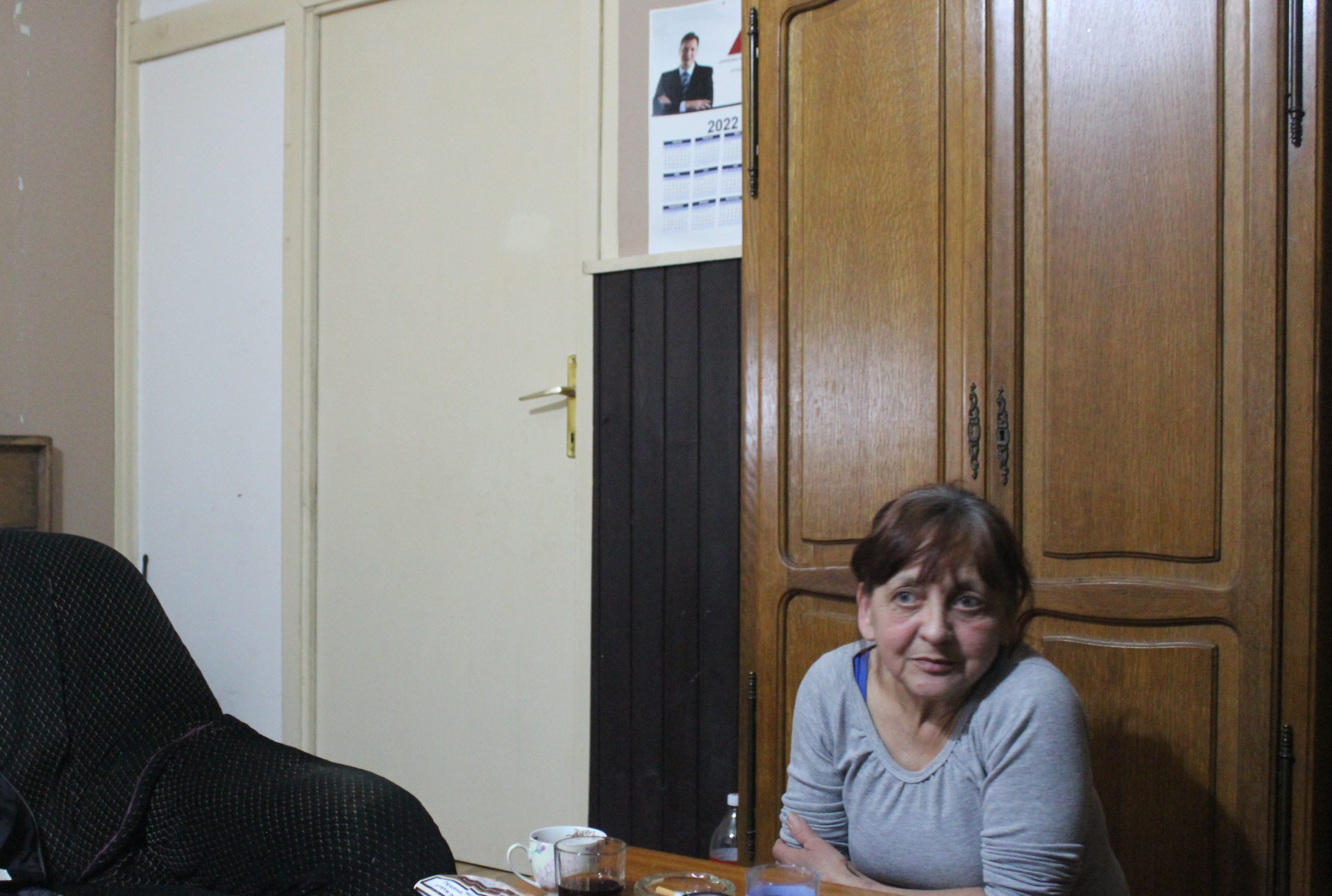 This is how Šipek recounts a meeting at which they were told that the apartments would be finished in November, when the Municipality told them that Vučić was “strong-arming everyone” for the apartments to be finished as soon as possible:

“’It has to be finished, President Vučić said so, or he will have our heads.’ I said, I'll put my head on the line if he knows what’s going on, but I don't believe you. ‘You'll see in November.’ And November went by, so what can I say?”

She points out that she still believes in Aleksandar Vučić, but that she no longer trusts the party.