Mala hidroelektrana Virovci, foto: CINS
Miloš Pandrc, convicted of drug smuggling as a member of Darko Šarić’s gang, was appointed – while in prison – as a representative of the company that built the Virovci hydropower plant. The company bought location and certain permits for the plant from a firm linked to another ex-gang leader. Virovci is one of the six plants which, according to the Ministry of Environmental Protection, obtained construction permits illegally

In late 2018, while driving down the narrow roads of Bosilegrad, along the Bulgarian border, looking for a suitable spot for photographing what was left of nature, journalists of the Center for Investigative Journalism of Serbia (CINS) came across willow stumps and destroyed riverbeds.

Hristov Botju from the nearby village of Donje Tlamino blames the damage on investors in small hydropower plants (SHPP), which is why he and his fellow citizens are protesting the construction of said plants in this area.

“This small river used to be abundant in brown trout,” Botju pointed at the river by the road. “We caught fish with our bare hands. Now they’re gone.”

In early 2019, local environmental associations organized a protest rally demanding, among other things, an investigation into how small hydropower plants pollute the environment. The local government, spearheaded by Bosilegrad municipal chief Vladimir Zaharijev, responded with a simultaneous counterprotest – justifying the investors, who have already built four SHPPs in Bosilegrad and are currently building four more.

The municipal administration played a part in it. Between 2010 and 2013 the municipal government issued construction permits for six SHPPs – Virovci, Reka 1, Bistar, Branjovica, Tlamino and Gradište.

Based on a memo sent by Botju, in early 2018 representatives of the Institute for Nature Conservation of Serbia conducted an inspection of completed and SHPPs under construction and established that the aforementioned SHPPs lacked the required conditions for nature conservation.

The municipal officials claim that according to regulations applicable at the time, the construction of hydropower plants did not require conditions for nature conservation, because they were an integral part of the reference conditions issued by the Republic Water Directorate, reads a reply delivered to CINS.

The ministries did not answer the journalists’ question, about whether the conditions for environmental protection were necessary at the time of issue of the construction permits.

The Institute identified other irregularities as well. While on some SHPPs fish ladders, which are to enable the free passage of fish, are closed by wooden bulkheads, the greenery by the riverside was removed during the construction of one hydropower plant.

“The destruction of habitats may cause a potential disappearance of fish species that are important to the local community for tourism and recreational or sport fishing, and that can produce economic consequences – less fishing tourism, less money,” Atlagić explained.

From Prison into Business

Away from the populated areas, the SHPPs of Bosilegrad, one of the poorest municipalities in the south of the country, are located one next to the other, leaving a long line of plastic pipes along the river. One of them, perhaps the most beautiful of all, SHPP Virovci, is located close to the Jarešnik nature reserve, a rare black pine subspecies forest on Mt. Dukat. The license for its construction was among those disputed by the Ministry of Environmental Protection inspectorate. Virovci was built by the VS Energy company in 2015, which was founded by Slavko Pandrc in Vrnjačka Banja, a town in central Serbia.

In an interview with a CINS journalist, Pandrc claimed that the Institute’s reference conditions had not been required at the time of issue of the controversial construction permit.

Asked why he hadn’t objected to the inspectors’ minutes when he’d had the chance, Pandrc replied that he had not wanted to engage in correspondence and that all the documents could be found at the Bosilegrad municipal administration headquarters.

When founding the company, Slavko Pandrc made another decision – to introduce his son, Miloš Pandrc, a former member of Darko Šarić’s gang, to the new, growing business in Serbia. In December 2018 Darko Šarić was convicted by the court of first instance of international smuggling nearly six tons of cocaine.

Miloš was charged, together with his brother Marko, with having taken part in cocaine smuggling in South America in 2008 and 2009, as part of an organized crime group.

One of the group’s plans had been to transport more than two tons of cocaine, packed in rubber balloons and placed into bags, to Uruguay and then to Europe on a large ship. However, what the members of this criminal group did not know was that U.S. and Serbian services had had their eye on them the whole time. On the night of October 15, in the port of Santa Lucia near Montevideo, the capital of Uruguay, police stormed the ship loaded with cocaine.

It would soon turn out that this event was just a part of a broader operation dubbed Balkan Warrior, aimed at stopping a group that smuggled drugs, which comprised Serbian and Montenegrin nationals headed by Darko Šarić.

As a member of this group, Miloš Pandrc was arrested not long after the drug raid in Uruguay. Three years later, in 2012, he made a plea bargain with the prosecution and pleaded guilty. On those grounds he was sentenced to ten years and six months in prison, and his car and two apartments in Belgrade were seized.

Years passed and Pandrc might have been forgotten in a sea of affairs and street clashes between criminals occurring on an almost daily basis, if he hadn’t decided to enter the small HPP business in 2015.

Miloš was appointed as one of the directors of VS Energy in 2015, regardless of the fact that he was still serving his prison sentence at the time. He was released from prison a year later, based on a decision by the Higher Court allowing him release on parole.

Slavko told CINS that he had appointed Miloš as director because he was his son and that he planned to leave the entire business to his heir, who – despite officially not being in the company anymore – still manages the business.

Miloš left the company after a year of the SHPP’s operation, and its head office was transferred to the Novi Beograd, a district of Belgrade. CINS journalists failed to establish contact with him before the publication of the article.

CINS reported earlier that the bulk of the money for the purchase of electricity from small hydropower plants had in the past few years been paid to the Electric Power Industry of Serbia (EPS) and to companies connected with Aleksandar Vucic’s best man Nikola Petrovic.

The documents gathered by CINS reveal that the land and construction permit for building the Virovci hydropower plant were purchased from the Pure Energy 2012 company, the ownership of which is linked to Ljubiša Buha a.k.a. Čume, the former head of a gang in a Belgrade suburb – Surčin gang.

Slavko Pandrc says he got land and the permit as compensation, because Pure Energy 2012 owed him money for the construction of the Gradište SHHP, built by his company Pandrc-Komerc.

“Better some repayment from a debtor than none. What was I supposed to do, not take that either and then I would neither have my cake nor eat it? We do compensation, that’s the whole point. I wouldn’t have gone into it if it hadn’t been for their debt to me,” he explained.

Ljubiša Buha is also known as the first witness collaborator in the proceedings for the assassination of Serbian Prime Minister Zoran Đinđić, and in the trials of Zemun, another Belgrade district, gang members. Buha has been in prison since 2015 for threatening and assaulting his ex-wife Ivana Tulović’s bodyguards, jeopardizing the safety of a police officer on her security detail, as well as for obstructing the investigation in that case. In late 2017 he was sentenced to another 16 months in prison and fined for threatening the prosecutor who had been leading a counterfeiting case against him.

Although Buha’s affairs were widely covered, he did not appear in those companies personally. One of them is the Banja Luka-based Lein company. Banja Luka is the second largest city in Bosnia and Herzegovina and the capital of its Republika Srpska entity.

The official owners of Lein are Željko Lalušić and Buha’s attorney Dušan Vasović. Vasović is known in Serbia for having privatized the Valjevo Road Company in 2005, where Buha is also suspected to be the actual owner. Ivana Tulović publicly said on several occasions that the companies in question had been controlled by her husband – the last such occasion was in 2017, when Lein bought the Srebrenica Bauxite Mine in Republika Srpska.

Dušan Vasović said he was unable to talk with CINS journalists due to private issues.

Through co-ownership of Pure Energy 2012, Lein sold the Pandrc family the land and construction permit for the construction of SHPP Virovci in 2015. That was done through the sale of Virovci to Pandrc’s VS Energy in 2015. The contract CINS gained access to does not show the value of the deal, rather only that it will be defined by a separate document, and may also be settled through debt offsetting.

However, the sale of Virovci was not the only time Lein made a profit in the area of small HPPs.

In Bosilegrad, Lein and its business partners at one point held permits and land for the construction of SHPPs at 24 locations.

As of 2010, the majority of locations were owned by the Best Energy System 2010 company, headed by CEO Nenad Novaković, while in the following years Lein and other foreign companies acquired stakes in the company. In 2003 Novaković led a consortium that purchased, in privatization procedure, the Niš Road Construction Company, having beaten Čume’s Defence Road company at an auction. Besides Novaković, the consortium also comprised businessman Milo Đurašković, who was later charged with tax evasion along with Miroslav Mišković, a businessman considered to be one of Serbia’s richest.

One of the locations is the site of SHPP Gradište, which Pandrc built, and which received more than 100 million dinars from the state budget between 2014 and 2017, for the produced electricity. Lein had been one of the owners of this hydropower plant until last year.

The text was created with the support of WWF Adria. The content of the text is sole responsibility of the author and does not necessarily reflect positions of WWF Adria.
From November 2018 to September 2019 the work of CINS is supported by Sweden, within the Belgrade Open School program “Civil Society as a Force for a Change in the Serbia’s EU Accession Process.“ 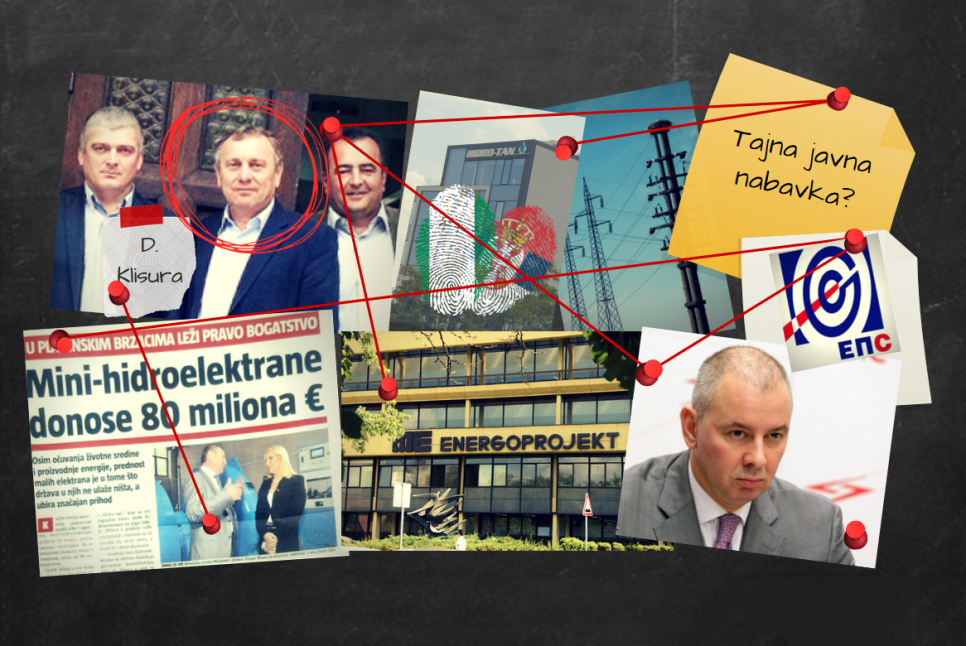 From Nigerian scheme to clandestine EPS procurement worth millions

Vladimir Kostić
Vladimir worked as a journalist and deputy editor at CINS for eight years, while today he is a freelance journalist, collaborating with multiple media organizations. With his coworkers, Vladimir won two National Awards for Excellence in Investigative Journalism, 2017 European Press Prize, the WJP Anthony Lewis Prize for Exceptional Rule of Law Journalism and a Balkan Fact-Checking Award. He specialized in writing about public finances, political parties, crime, and corruption. Over the last year his focus was on investigating the business of small hydropower plants and their environmental impact.
Send idea
Read all
Dina Đorđević
Member of CINS since 2017, after she finished CINS Investigative Journalism School in 2015 as the most successful participant. Dina mostly covers topics related to ecology, and contributes to multimedia production of CINS with the production of short videos and infographics. She won the 2019 special merit award within the National Awards for Excellence in Investigative Journalism and “Marina Kovačev” award in 2018 for the best young journalist under 30. Dina was a member of CINS investigative team which won the 2017 national award “Dušan Bogavac” for ethics and courage and a finalist for the 2018 National Awards for Excellence in Investigative Journalism.
Send idea
Read all