Toilet at the Vuk Karadžić Elementary School in Crvenka; photo sent by a CINS reader
Although the number of elementary schools with non-existent or non-functioning toilets is rising and poor hygiene continues to pose a risk to children’s health, their reconstruction is not a priority for the Ministry of Health and the Provincial Secretariat for Education. CINS has discovered that before and during the coronavirus pandemic, from 2018 to 2021, schools requested money for reconstructing or building toilets 182 times, but that these institutions approved the funding of just 20 projects. In the words of a doctor from the Pirot Public Health Institute, children’s health must be a priority.

Squat toilets, poor hygiene, occasional unpleasant smells and inoperative water tanks – this is how the parent of a student at the Vuk Karadžić Elementary School in Crvenka, near Vrbas, describes the state of the school toilet. Some 850 students go to that school.

“Absolutely everything needs to be changed – yesterday,” adds the parent, speaking on condition of anonymity.

Doctor Jelena Zelić of the Sombor Public Health Institute earlier explained to the Center for Investigative Journalism of Serbia (CINS) that this toilet needed to be reconstructed:

“There are no doors, the pipes are rusty, they’re squat toilets. A squat toilet is a hygienic form of toilet, but this one is rusty, run-down. Disinfectant can be poured there infinitely, but it’s basically pointless. Some reconstruction simply has to be carried out.” Although Zelić did not say what school she was referring to, CINS found out that it is Vuk Karadžić in Crvenka.

Where reconstruction is concerned, schools first and foremost apply for competitions with the Ministry of Education, Science and Technological Development and the Public Investment Management Office, whereas for smaller projects, such as painting or replacing lighting, the funds can be provided by the local self-government, too. Schools in the territory of Vojvodina can also request money from the Provincial Secretariat for Education, Regulations, Administration and National Minorities – National Communities. In 2018 and 2019, the Province had an annual budget of between 186 million and 204 million dinars for school projects, followed by the Ministry with roughly 90 million dinars.

CINS’ research shows that before and during the coronavirus pandemic, hygiene in schools was not a priority for the Ministry and the Provincial Secretariat when it comes to reconstruction of schools, and that certain schools have had their requests denied for years. Over the course of three years, from 2018 to the end of 2020, funds were requested from these two institutions for the reconstruction, building or adaptation of school toilets 182 times. Twenty projects were approved. In that period, the Province invested 8.4% of the total allocated money in these projects, while the Ministry invested 3.3%.

The fact that the school in Crvenka applied for competitions three years in a row also proves that it needs help. According to the data CINS obtained, this elementary school requested 10.6 million dinars from the Ministry for restroom reconstruction in 2018–2020. It was turned down every time.

School principal Nataša Đerić did not wish to talk with the CINS journalist.

Ministry officials earlier told CINS that the sum “greatly exceeds the funding that may be awarded to a single school.”

However, CINS has discovered that over the past three years the Ministry has awarded more than that amount to four schools: two received funds for woodwork replacement (one of them got a new façade, too), one for a gym at a satellite unit, and one for sports field reconstruction.

In early 2020, the Stančić Milan Uča Elementary School in Kumane, near Zrenjanin, was awarded 10.9 million for the reconstruction of the sports field in the schoolyard. According to the data from the public procurement procedure organized by the school, the money was spent on two handball goals, the replacement of basketball hoops and floodlights, and the yard was concreted for some 320 students.

Toilet at the Vuk Karadžić Elementary School in Crvenka; photo sent by a CINS reader

The school in Crvenka is not a lone example.

We previously showed that toilets or hand wash sinks either did not exist or were inoperative in at least 87 elementary schools in Serbia in 2019, and that the number is growing.

The Ministry denied funding for toilet reconstruction in the 1. Oktobar Elementary School in Bašaid, near Kikinda, in 2020.

The school got the money that same year, but from the local self-government. Instead of the 4.8 million it had requested from the Ministry, it received 1.7 million from the City of Kikinda.

When asked why the Ministry did not grant them the money, school principal Mirko Vlajkov replied that he had not asked and that the Ministry never offered an explanation:

“We do not know why, they do not give information on why they turn someone down.”

He adds that the sanitation blocks have not been repaired since the 1970s, but claims that the problem has now been solved thanks to the City’s donation.

Ministry representatives declined an interview and did not answer any of CINS’ questions.

This kind of project selection has been going on for years now.

The Provincial Secretariat earmarked money for 59 projects in 2018, three of which were for restroom reconstruction – 7.7 million dinars in total. Twenty-four schools requested funding for that purpose, through 29 projects.

That same year, the Province awarded 4.7 million dinars to a school for the reconstruction of the schoolyard. It was the Miroslav Antić Elementary School in Odžaci.

The following year, the situation was better: out of the 53 green-lighted projects, 10 were related to toilet reconstruction (and 24 schools requested funding through 31 projects).

There were instances where a school would not get money for toilets, but did get it for some other works. For example, the Jovan Grčić Milenko Elementary School in Beočin did not manage to fix the toilets in 2018 (for 1.5 million dinars) or in 2019 (1.3 million), but did replace the woodwork in 2018, for 4.7 million.

Officials of the Provincial Secretariat explain that there are several criteria for evaluating applications. They include the importance of a project for the students and employees, impact on the quality of classes, financial justifiability, and sustainability. They claim that there is no limit to the amount a school can request and receive.

Sanitation blocks are one of the priorities, the Province says, but so is repair of leaky roofs, reconstruction of installations, damaged woodwork, damaged access roads and sports fields, repair of collapsing facades.

Doctor Tatjana Vidanović from the Pirot Public Health Institute believes that hygiene must be a priority in schools:

“Safe drinking water at all times, and not only for drinking but for washing hands and face, for everything, since a number of schools do not have that.”

Asked what she thought was more important, investing in toilets or in other projects, like equipping schoolyards, Vidanović points out that construction of sports fields is in distant second place.

“As far as health is concerned, those are two things that cannot be compared.”

Whether money is invested in hygiene also depends on whether schools even request that in competitions.

For example, the Mića Stanojlović Elementary School in Koceljeva (a small town between Šabac and Valjevo) received 11.5 million dinars from the Ministry for the gym in a satellite unit in 2019. That unit was attended by 88 students at the time. On the other hand, data of the Šabac Public Health Institute show that in the school’s four satellite units, with fewer than ten students per unit, the students do not have the option of washing their hands. Principal Sonja Popović did not apply for funding for the sinks because, as she puts it, they are trying to solve the problem using their own funds.

The Provincial Secretariat says in its reply that about 20% of all applications submitted do not meet the formal requirements:

“[They are] applications without attached complete documents required by the competition, or they had formal shortcomings, such as for example with the bill of quantities and cost estimate (older than 6 months, not signed by the responsible designer, not numbered), the design documentation was not submitted or was incomplete, (…) the application was submitted by the wrong applicant.” 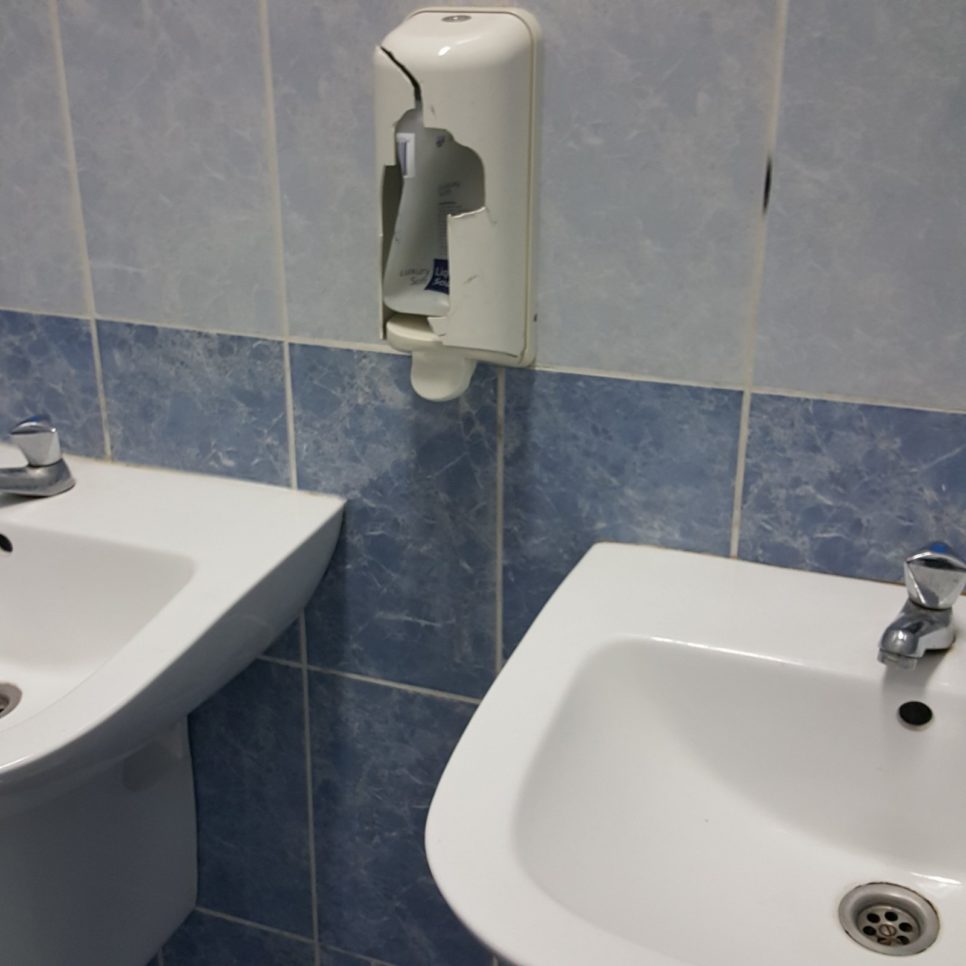